Loops are a handy way to do something over and over for as few or as many times as you like. Let's say we wanted to draw a row of small circles across our sketch, like so:

Yes, you could type the `ellipse` command many times over, but it's just easier to let the computer do the repetitive work for you.  This is where loops come into play.

The first kind of loop we'll use is a `while` loop:

There are three critical parts to every loop:

The final, and more interesting part of a loop is the rest of the code that you want to run, in the example, it's just a single drawing command:

Another kind of loop is a `for` loop. `for` loops have the same three critical elements as `while` loops, just expressed in a different way.  Here's the same example as above, but written as a `for` loop:

In `for` loops, the initialization, test and change all happen within the parenthesis - separated by semi-colons. You could rewrite the above `for` loop like this, just to separate the three parts (it's silly, but will actually run):

In general, even though `for` loops and `while` loops are functionally interchangeable (i.e. they do the same thing), you'll use `for` loops for counting things, like "draw 10 squares", and `while` loops for gradually changing something, like "draw squares until I reach the edge of the canvas." A lot of programmers us the variable `i` or `n` as a counter in while loops. You can change multiple variables as you progress through a loop, but you'll usually just test one.  For example - can you figure out what this draws:

Here are some ideas for you to try on your own: 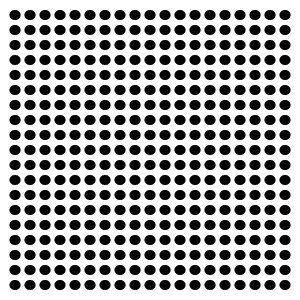