Anatomy of a sketch

Every sketch has two functions - setup and draw. These are the starting points for all sketches, and for now, everything you write will be contained inside them. The function setup is called once, when your sketch is first run. It’s a place for you to set up some things about your sketch that won’t change. Here’s an example:

The most important thing to do in setup is to let processing know how big you want your sketch to be - or in other words, how big the canvas on which you draw should be. The second function draw is called repeatedly, forever (as long as your sketch is running). This function is where you’ll do most (if not all) of your drawing. Here’s an example:

Note that there’s some funny syntax in there. It’s all important, but pretty simple once you know what it’s for. The first funny bit is the the beginning of a function:

In this case, “draw” is the name of the function. “void” just needs to be there, as do the parenthesis. We’ll come back to these a bit later, so just ignore them for now. The next part of the function is the opening curly brace:

Everything in between these curly braces is called a block. A block is where you can give the computer as many instructions as you want. Each instruction is called a statement. This collection of statements inside the block is what defines the body of a function. Everything that you want to happen as a part of a function should be inside the function's curly braces. Let’s look at some of the statements inside the example draw function:

Notice all the // characters - whenever you see this, it means that everything else on the line is a comment, and can be ignored. Comments are good to have, because they are like little bits of documentation, or instruction - notes to yourself or anyone else that might be helpful in understanding what the code does. Without the comments, there are two statements in the function, the first is:

This simply erases the background of the canvas with a specific color - in this case white. The next statement is:

This one draws a circle in the middle of the canvas. There are a few things that these statements have in common.

If you have done any graphing in school, you will likely have seen a graph that looks something like this:

This is a standard way of plotting points in math & science: 0,0 is in the middle; x values increase from left to right; and y values increase from bottom to top (these are called cartesian coordinates, but you don’t need to remember that). If you have ever used Scratch (http://scratch.mit.edu), this may look familiar: 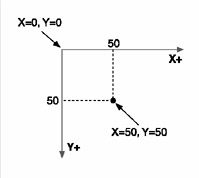 When drawing in Processing, we are drawing individual pixels. When you create a canvas that’s 300 x 300, you are creating a grid of 300 x 300 pixels - 90,000 (300 times 300) little squares that you can fill in with any color you like. For example, the text you are reading right now is composed of little tiny pixels, and if you could zoom in, you would see the pixels:

The first thing you’ll want to do, before you draw anything, is to set your background color. To do this, you’ll use the background() command. There are two versions of this command. The first version erases using a grayscale value - which is just a fancy way of saying a shade of gray - from black to white:

This will erase the background using black:

This will erase the background to white:

You can use the Color Selector in the Tools menu to visually choose colors. Anywhere that you can enter a color, you can use either the single grayscale value, or the three values for red, green, and blue.

Things you can draw

There are many built in shapes and things that you can draw. You can draw circles and ellipses using the ellipse() command (for a circle, width and height should be the same number of pixels):

Change the fill color for all shapes that follow:

Change the line/stroke color for all shapes that follow:

Change the line/stroke thickness for all shapes that follow:

Here are some ideas for you to try on your own:

Start with this sketch to make things a little easier for yourself! You can work right in Sketchpad, or just copy and paste the code below into the Processing app.